On the Create Menu there is an extra panel that can be opened which allows you to set various visual options about how the shield is drawn. These are described in more detail here. In addition to setting options using the form there is also a facility to specify these options by a extension to the blazon itself.

Options are introduced by the word drawn, which MUST come after all other the parts of the blazon. Options set in the blazon override those set on the create page.

Note that options set by using the drawn keyword in the blazon are NOT reflected in the "Drawing Options" form and hence are NOT saved between sessions. The advantage of using options set in the blazon itself is that they are easier to store and pass around.

To set the visual effect (actually an SVG filter) which changes the overall appearance of the shield you can say for example drawn with a stonework appearance, or drawn in a shiny style. The available effects are (plain, flat, none), (stone, stony, stonework), (plaster, plasterwork), (vellum, leather), (metal, shiny), where the brackets indicate words with the same meaning.

Heraldry has no set colours for tinctures, they are left to the discretion of the herald. DrawShield allows you to select from a number of colour "palettes". This is done by using a construction such as drawn with wikipedia tinctures or drawn in emoji colours. The available palettes are drawshield (the default), emoji, wikipedia, wappenwiki, bajuvarian, nocolour. With the "Nocolour" palette all tinctures except for black and gray are drawn white. This is useful if you want to create images for colouring later.

It is also possible to chose the overall shape of the shield, using the construction drawn in a XXXXXX shape, where XXXXX is one of the words default, heater, French, Oval, Lozenge, square, Italian, Swiss, English, German, Polish, Spanish.. The corresponding shapes are shown below:

The heater shape is used by default, unless the shield contains 8 or more subshields, in which case the French shape is used. 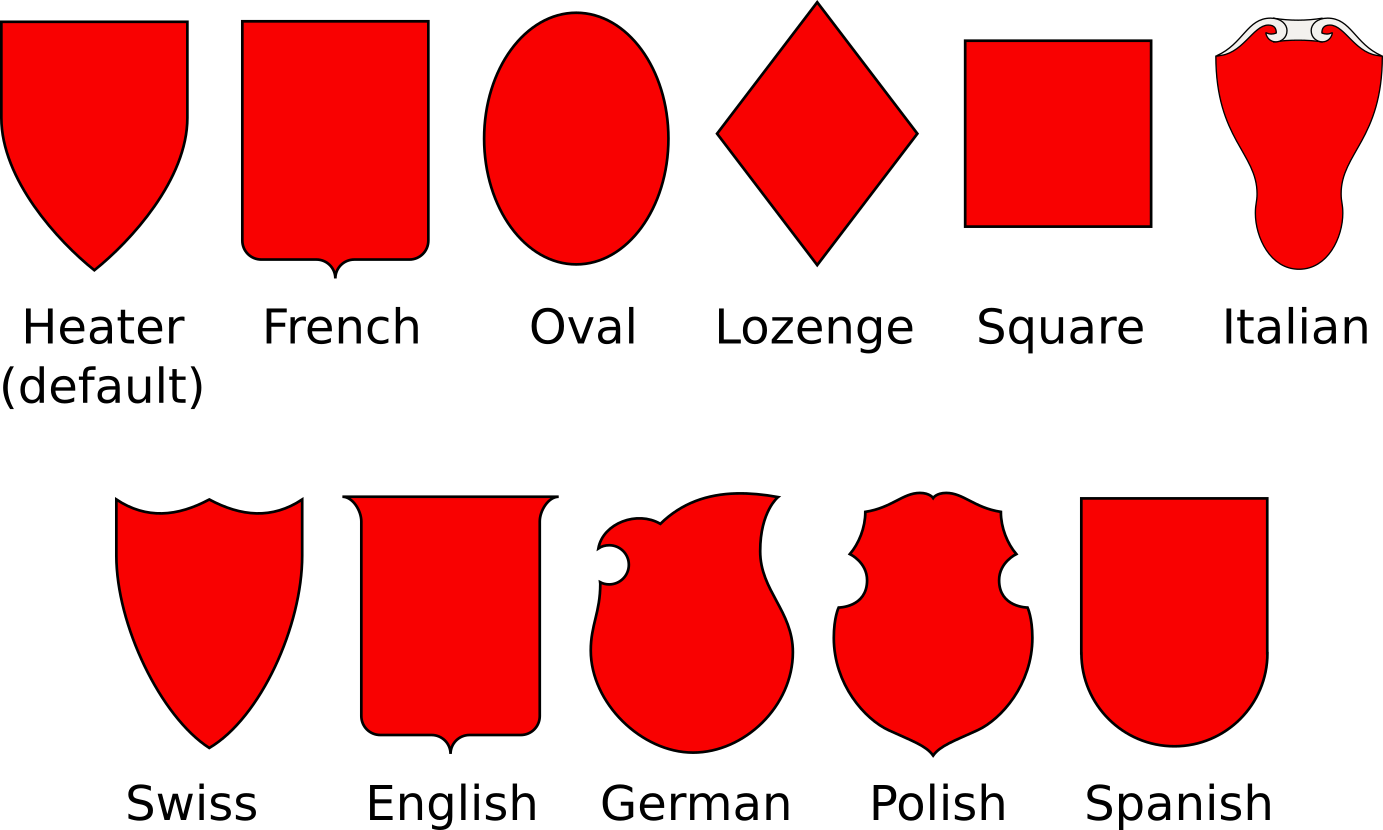 All shapes can be correctly given a bordure but almost everything else that relies on the shape of the shield probably won't work, and there are likely to be many times in which placements and arrangements put charges that overlap the edges or show other strange effects, you may find the charge adjustments extension helpful in these cases.

In addition to the heraldic shield shapes shown here, there are shapes that trigger additional extensions, see the flags extension and the Warhammer Pauldrons extension.

Options can be combined, for example drawn in a plain style and in emoji colours